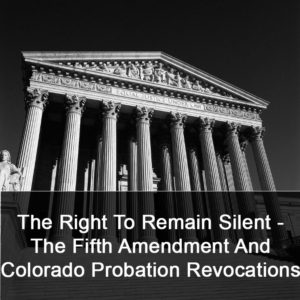 The Right To Remain Silent – The Fifth Amendment And Colorado Probation Revocations – The fear of self incrimination during probation is very real. A new case by the Colorado Supreme Court helps clarify the invocation of the Fifth Amendment right to remain silent in the context of Colorado sentences to probation.

“shall be compelled in any criminal case to be a witness against himself, “

“official questions put to him in any other proceeding, civil or criminal, formal or informal, where the answers might incriminate him in future criminal proceedings…”

The Fifth Amendment prohibits only compelled testimony that is incriminating.

What Then Is Incriminating Testimony?

The confusion occurs when a witness believes, or has a fear, that there might be a possibility of prosecution but in the eyes of a judge – that fear is not reasonable. The person asserting the “Fifth” must demonstrate “a reasonable fear of prosecution sufficient to meet constitutional muster.”

Finally, the State must compel the answer that could lead to prosecution.

The privilege against self-incrimination, however, “is an option of refusal, not a prohibition of inquiry.”

The privilege may not be asserted as a blanket claim in advance of the questions actually propounded. A witness who desires the privilege’s protection generally “must claim the privilege at the time he or she relies on it”

On the other hand, the failure to assert the privilege may forfeit the right to exclude the evidence in a subsequent ‘criminal case.’ What this means practically is this –  the person seeking the protection of the Fifth Amendment was be alert and exercise at the time it is most needed.

The person on probation seeking to assert the “Fifth” does not need to wait until the State of Colorado tries to use incriminating statements against him at a subsequent criminal trial to invoke his Fifth Amendment privilege, he is allowed to act pro-actively.

The issue, after Roberson, is whether the form of treatment ordered by the Judge would result in the disclosure of potentially incriminating disclosures.

When a person is placed on probation – they CAN be ordered into treatment even if the offender believes the treatment will violate their Fifth Amendment right against self-incrimination.

Attending treatment is not, by definition, self incriminating. For example, the psychosexual evaluation which is imposed as a condition for every application of sex offender intensive supervision probation (SOISP) does not alone, violate the defendant’s Fifth Amendment right against self-incrimination.

The very nature of probation requires a probationer to appear and discuss how the term of probation is proceeding and all matters relating to his or her probation.

While the State of Colorado cannot revoke a probationer offender for a valid invocation of his or her privilege against self-incrimination during probation, the person placed on probation CANNOT refuse to participate in treatment without more evidence that such participation would lead to a new and different prosecution.

Therefore a blanket assertion of the “Fifth,” to taking a polygraph test in the context of Colorado sex offender treatment, is not itself a violation of the Fifth Amendment. An infringement can occur only if the questions asked during the polygraph require a potentially incriminating disclosure compelled by the probation department? (see below).

The clearest example of the lawful exercise of the right to remain silent under the Fifth Amendment as a probationer is when a probationer refuses to answer a polygraph examiner’s question that could clearly incriminate them and subject them to future prosecution.

In People v. Roberson, in the context of sex offender intensive supervision probation, Roberson became concerned that the polygraph examiner was “fishing” for information that might be used to incriminate him.

Importantly one can invoke the “Fifth” not only to actual evidence of additional crimes but also to other evidence that “would furnish a link in the chain of evidence” that could be used to file a new case against the probationer.

If Roberson had not refused to answer the polygraph examiner’s question regarding his use or viewing of child pornography while on probation he was facing the real possibility of a future prosecution and not just a revocation of probation.

The reader is admonished that Colorado criminal law, like criminal law in every state and at the Federal level, changes constantly. The article appearing above was accurate at the time it was drafted but it cannot account for changes occurring after it was uploaded.

If, after reading this article, you have questions about your case and would like to consider retaining our law firm, we invite you to contact us at the Steinberg Colorado Criminal Defense Law Firm – 303-627-7777.

Never stop fighting – never stop believing in yourself and your right to due process of law. You will not be alone in court, H. Michael will be at your side every step of the way – advocating for justice and the best possible result in your case. H. Michael Steinberg is passionate about criminal defense. His extensive knowledge and experience of Colorado Criminal Law gives him the edge you need to properly handle your case 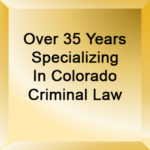 ABOUT THE AUTHOR: H. Michael Steinberg – Email The Author at hmsteinberg@hotmail.com – A Denver Colorado Criminal Defense Lawyer – or call his office at 303-627-7777 during business hours – or call his cell if you cannot wait and need his immediate assistance – please call 720-220-2277.

You should be careful to make a responsible choice in selecting a Colorado Criminal Defense Lawyer. We encourage you to “vet” our firm. Over the last 30 plus years – by focusing ONLY on Colorado criminal law – H. Michael has had the necessary time to commit to the task of constantly updating himself on nearly every area of criminal law, to include Colorado criminal law and procedure and trial and courtroom practice. H. Michael works hard to get his clients the best possible results in and out of the courtroom. He has written, and continues to write, extensively on Colorado criminal law and he hopes this article helps you in some small way -The Right To Remain Silent – The Fifth Amendment And Colorado Probation Revocations. 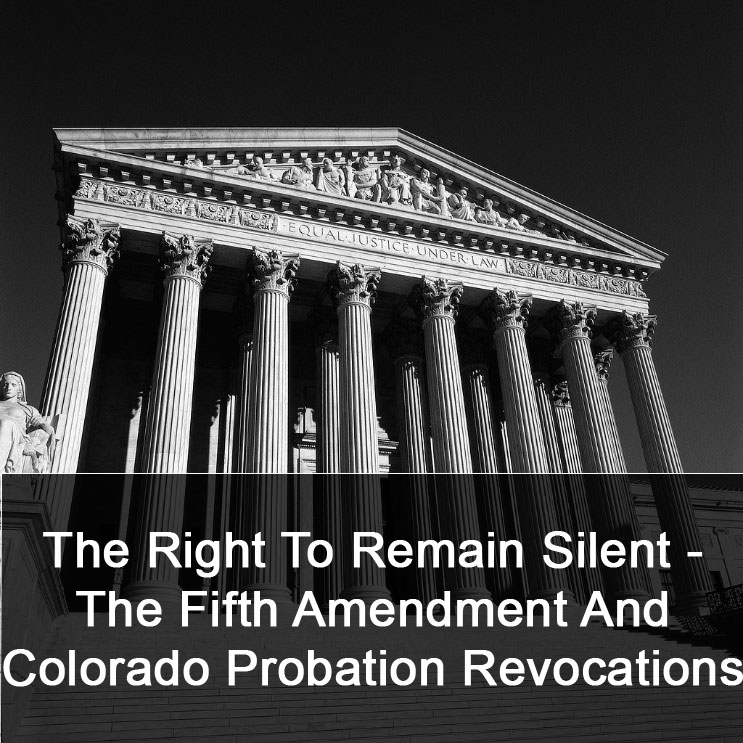 Article Name
The Right To Remain Silent - The Fifth Amendment And Colorado Probation Revocations -
Description
The fear of self incrimination during probation is very real. A new case by the Colorado Supreme Court helps clarify the invocation of the Fifth Amendment right to remain silent in the context of Colorado sentences to probation.
Author
H. Michael Steinberg