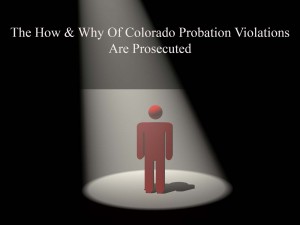 The How & Why Of Colorado Probation Violations Are Prosecuted

The How & Why Of Colorado Probation Violations Are Prosecuted – Over 4 million people in the U.S. are currently on probation.  Half of those are on felony probation where a violation of that probation may mean a sentence to prison. In some states, including Colorado, it is not uncommon for over half of all those placed on probation to violate the terms of their sentence at some point in their sentence.

At the Steinberg Colorado Criminal Defense Law Office, H. Michael Steinberg represents those accused of the most serious accusations of the violation of their probation sentences. In most instances our firm can avoid jail by negotiating with your probation officer and the DA – Prosecutor to present evidence of extenuating “mitigating” circumstances that may allow you to avoid being sentenced to jail or prison. H. Michael is both knowledgeable and experienced in seeking alternatives to jail that include such probation conditions as community service, home detention, and alcohol and drug abuse counseling.

Warning 1: Judges Must Make “Findings” When They Revoke A Defendant’s Probation

If the Judge in your case finds that you have violated probation – that Judge must make specific findings of those violations from the evidence presented at the revocation hearing.

The evidence must support that violation, and it if it doesn’t, the lawyer should argue that the Court revoked probation based on insufficient evidence. A revocation of probation cannot be based solely on the existence of a new and pending criminal charge. There must be a conviction of that crime before a Judge can revoke probation for a Judge to use the new case as grounds to revoke the older case.

Here is the Colorado LAW Regarding Your Rights In A Colorado Probation Violation Hearing:

(1) At the first appearance of the probationer in court or at the commencement of the hearing, whichever is first in time, the court shall advise the probationer as provided in section 16-7-206 insofar as such matters are applicable; except that there shall be no right to a trial by jury in proceedings for revocation of probation.

(2) At or prior to the commencement of the hearing, the court shall advise the probationer of the charges against him and the possible penalties therefor and shall require the probationer to plead guilty or not guilty.

(3) At the hearing, the prosecution has the burden of establishing by a preponderance of the evidence the violation of a condition of probation; except that the commission of a criminal offense must be established beyond a reasonable doubt unless the probationer has been convicted thereof in a criminal proceeding.

When, in a revocation hearing, the alleged violation of a condition is the probationer’s failure to pay court-ordered compensation to appointed counsel, probation fees, court costs, restitution, or reparations, evidence of the failure to pay shall constitute prima facie evidence of a violation.

The court may, when it appears that the alleged violation of conditions of probation consists of an offense with which the probationer is charged in a criminal proceeding then pending, continue the probation revocation hearing until the termination of the criminal proceeding. Any evidence having probative value shall be received regardless of its admissibility under the exclusionary rules of evidence if the defendant is accorded a fair opportunity to rebut hearsay evidence.

(5) If the court determines that a violation of a condition of probation has been committed, it shall, within seven days after the said hearing, either revoke or continue the probation. If probation is revoked, the court may then impose any sentence or grant any probation pursuant to the provisions of this part 2 which might originally have been imposed or granted.

In Colorado, the “scope” of a probationer’s constitutional rights is severely limited under the law – thus making representation an effective lawyer even more important. At the probation revocation hearing , a probationer is not entitled to claim the full range of constitutional guarantees available to a person who has not yet convicted of a crime.

While there are certain “minimal” procedural due process rights provided to the accused at a Colorado probation revocation hearing, he or she is not entitled to the full panoply of constitutional guarantees available to one who has not been convicted of a crime. For example the admission of illegally seized evidence is allowed.

Warning 2: The Minimum Requirements of Due Process at Colorado Probation Revocation Hearings are:

(a) Written notice of the claimed violations of probation;

(b) The Disclosure to the probationer of evidence against him;

(c) The Opportunity to be heard in person and to present witnesses and documentary evidence;

(d) The right to confront and cross-examine adverse witnesses (unless the hearing officer specifically finds good cause for not allowing confrontation);

(e) A “neutral and detached” hearing body such as a traditional parole board, members of which need not be judicial officers or lawyers; and

(f) A written statement by the fact finders as to the evidence relied on and reasons for revoking probation.

Warning 3: You Need To Know The Typical Allegations Of Failing to Comply with the Terms of Your Probation In Colorado Probation Revocation Hearings 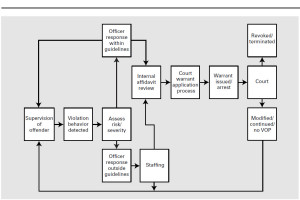 At the Colorado Probation Violation Hearing – your probation officer will usually testify informally against you. If you are represented by an attorney, your lawyer has the option of calling the PO formally for cross-examination. This strategy makes sense only if there is strong evidence that you did NOT violate a term of your probation.

While H. Michael Steinberg is well-known and well-respected to many probation officers throughout the Front Range of Colorado, there are, of course, no guarantees that a successful negotiation will be the result.

Warning 5: Understanding What It Means To Enter Into Informal Agreements To Modify Probation Upon Threat Of Complaint To Violate Probation

If it is possible to modify or extend your probation informally with the consent of the parties, this is known as an agreed upon “motion to modify probation” without the need to litigate the charges in a formal Colorado Probation Revocation Hearing.

Typically the probationer and probation officer sign it and it is later signed by a judge.

The order is then entered, probation is extended.

Not only is there nothing wrong with modifying probation without first finding a violation – Colorado law provides for it.

The How & Why Of Colorado Probation Violations Are Prosecuted

The reader is admonished that Colorado criminal law, like criminal law in every state and at the Federal level, changes constantly. The article appearing above was accurate at the time it was drafted but it cannot account for changes occurring after it was uploaded.

If, after reading this article, you have questions about your case and would like to consider retaining our law firm, we invite you to contact us at the Steinberg Colorado Criminal Defense Law Firm – 303-627-7777.

Never stop fighting – never stop believing in yourself and your right to due process of law. You will not be alone in court, H. Michael at your side every step of the way – advocating for justice and the best possible result in your case.

ABOUT THE AUTHOR: H. Michael Steinberg – Email The Author at [email protected] – A Denver Colorado Criminal Defense Lawyer – or call his office at 303-627-7777 during business hours – or call his cell if you cannot wait and need his immediate assistance – 720-220-2277. Attorney H. Michael Steinberg is passionate about criminal defense. His extensive knowledge and experience of Colorado Criminal Law gives him the edge you need to properly handle your case.

You should be careful to make a responsible choice in selecting a Colorado Criminal Defense Lawyer – and we encourage you to “vet” our firm. Over the last 30 plus years – by focusing ONLY on Colorado criminal law – H. Michael has had the necessary time to commit to the task of constantly updating himself on nearly every area of criminal law, to include Colorado criminal law and procedure and trial and courtroom practice. H. Michael works hard to get his clients the best possible results in and out of the courtroom. He has written, and continues to write, extensively on Colorado criminal law and he hopes this article helps you in some small way – The How & Why Of Colorado Probation Violations Are Prosecuted. 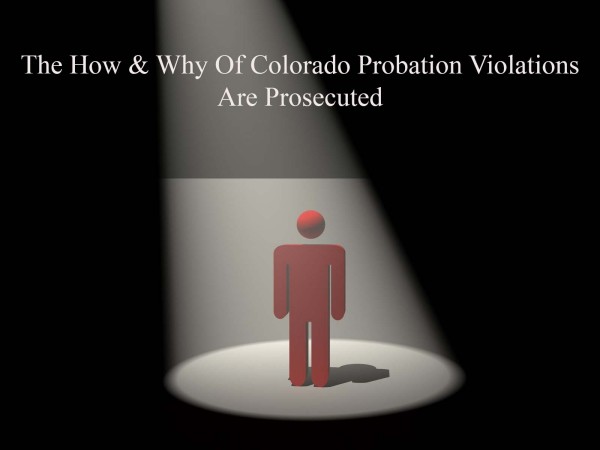 Article Name
The How & Why Of Colorado Probation Violations Are Prosecuted
Description
Over 4 million people in the U.S﻿. are currently on probation. Half of those are on felony probation where a violation of that probation may mean a sentence to prison. In some states, including Colorado, it is not uncommon for over half of all those placed on probation to violate the terms of their sentence at some point in their sentence.
Author
H. Michael Steinberg