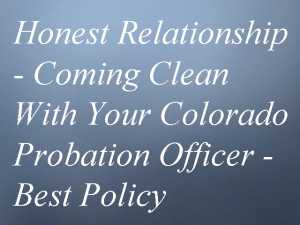 When a judge grants you a probation sentence in a felony case for example – it constitutes a bond of trust between the judge and you – meaning that – rather than sentence you to prison on a felony – you can remain in the community and establish that the judge, by placing trust in you, was justified in doing so.

If the probation sentence is supervised you will be assigned a probation officer whose duty to you and to the Court is to make certain you understand your obligations under the sentence and that those obligations are performed in a timely way.

So when a court in Jefferson County Colorado granted probation to a woman four years ago – (the wife of a police officer no less) – it was kind of a gift – as this woman had defrauded many innocent people into giving her money out of kindness and compassion for a disease – cancer – she never had and she was then caught lying to her PO – she was sentenced to prison.

The case: This week 34-year-old Ann Crall was sentenced to eight years in Colorado Department of Corrections for violating probation for forging documents that are used to prove compliance with probation.

After her conviction four years ago for theft and charitable fraud (after manipulating her husband, her neighbors and her friends out of $60,000 in donations), the Jefferson County District Court Judge who sentenced her granted her the opportunity to prove her worth and gave her a chance at probation.

Not only will Ms. Crail serve her sentence for violation her probation – she will also be prosecuted for allegedly committing the new crime of forgery.

The Takeaway – Communicate Honestly With Your Colorado Probation Officer

AFTER you have decided to plead guilty in a criminal case – many of your rights in THAT case are permanently gone.  Although it may be difficult to accept – you must form a trust relationship with the one person who can send you – in short order sometimes – to jail or prison among other changes to your sentence.

That person is your PO.

Call me or another qualified Colorado Probation Criminal Defense Lawyer – if you sense you may be in trouble – and I will do what I can to head off a probation violation. More importantly keep the faith with your Colorado probation officer and you will much better off in the long run.  H.. Michael Steinberg