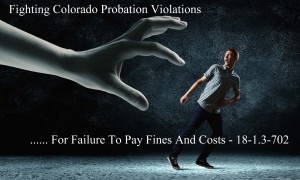 Fighting Colorado Probation Violations For Failure To Pay Fines And Costs – Until very recently judges in our Colorado courts were routinely jailing individuals for the non-payment of fines and other court costs.

As a result of privatizing probation services – individuals – private probation officers so to speak who are  so poorly trained and who do not fully understand the impact a jail sentence may have on a person’s future -filed complaints to revoke the probation of people unable to pay their fines and costs because of financial hardship.

So called “private probation” has been called “offender-funded justice” because of the shift from using state and local employees to private owned and operated companies that contract with local probation offices to deliver probation based services.

With the privatization of probation officers – Colorado is one of more than a dozen states, including Alabama, Florida, Georgia, Idaho, Illinois, Michigan, Mississippi, Missouri, Montana, Tennessee and Utah, – saving tax dollars by squeezing those on probation. In these states private probation officers have financial motivations to collect the money from those on probation or under Court supervision.  Private probation has been heralded as cost saving when compared to the costs of the equivalent state employee. The motivation to prove this theory by collecting previously uncollected court fines and costs – has led to the issuance of hundreds if not thousands of arrest warrants based on the failure to pay court fines and costs.

These unfair and “cold” decisions to request arrest warrants for the failure to pay fines and costs whether the non-payment was the result of financial hardship or it was purely willful in nature  – led to an investigation by the ACLU and a new law passed by the Colorado State Legislature and signed by the Governor to address the issue.

The costs of probation are many and can be prohibitively expensive. Probation supervision fees run $50.00 a month. Add to that costs for drug and alcohol classes, domestic violence treatment, useful public service fees, ankle monitoring fees, drug and alcohol evaluations and monitoring costs for UA’s (urinalysis) or breathalizer fees, and the costs escalate and the list of the costs is seemingly endless.

Here is the list of possible COURT costs -(not including restitution and interest on that restitution) as excerpted from the statute):

(a) Any docket fee required by article 32 of title 13, C.R.S., or any other fee or tax required by statute to be paid to the clerk of the court;

(d.5) The actual costs paid to any expert witness;

(II) For any person required to travel more than fifty miles from the person’s place of residence to the place where specified in the subpoena, in addition

to the witness fee and mileage specified in subparagraph (I) of this paragraph (e):

(A) Actual lodging expenses incurred; and

(B) Actual rental car, taxi, or other transportation costs incurred;

(e.5) If a person under eighteen years of age is required to appear, the amount that a parent or guardian of the person was paid for transportation and lodging expenses incurred while accompanying the person;

(f) Any fees for exemplification and copies of papers necessarily obtained for use in the case;

(g) Any costs of taking depositions for the perpetuation of testimony, including reporter’s fees, witness fees, expert witness fees, mileage for witnesses, and sheriff fees for service of subpoenas;

(h.5) Any fees for interpreters required during depositions or during trials;

(i) Any item specifically authorized by statute to be included as part of the costs;

(l) Any costs incurred by the law enforcement agency in photocopying reports, developing film, and purchasing videotape as necessary for use in the case;

Even for the smallest of crimes court costs can run into the hundreds if not thousands of dollars.

Notwithstanding the Colorado constitutional prohibition of jailing the indigent – ( “no person shall be imprisoned for debt.”), Judges – especially at the municipal level -routinely jailed the poor where they could not pay their court costs and fines.

“Incarcerating the poor creates a two-tiered system of justice. The poorest are punished more harshly and, due to escalating fines and fees that attach because of late payments or non-payments, poor people pay more in fines.”

Why The New Law Makes Sense

The new law – reprinted below – allows Judges to determine if a person is able or unable to pay a fine, and once that determination is made – find a solution that makes sense to “pay “the fine or cos. This can include things such as public service or a payment plan.

It is only after this evaluation – if it is established that an individual can pay but then chooses not to do so, that they are can be found to be in “contempt of court.”

Putting aside the unconstitutionality of the incarceration of criminal court “debtors” – incarceration leads to the loss of employment, housing, the breakup of families – and sometimes the need to go on public assistance before locating a new job.

Jailing a person because they owe a debt to the criminal courts of Colorado means not only that the Court will not collect that debt, it means the costs of jail is taxed to the public. This makes no sense and is one of the main reasons support for the new law was bipartisan here in Colorado.

The ACLU specifically went after the municipal courts of Colorado such as Westminster, Wheat Ridge, and Northglenn – these cities would routinely issue “pay or serve” warrants without NO consideration as to the debtor’s ability to pay.

(1) (a) When the court imposes a sentence that includes the payment of a monetary amount, the court may direct as follows:

(I) That the defendant pay the entire monetary amount at the time sentence is pronounced;

(II) That the defendant pay the entire monetary amount at some later date;

(III) That the defendant pay as directed by the court or the court’s designated official the monetary amount:

(A) At a future date certain in its entirety;

(B) By periodic payments which may include payments at intervals, referred to in this section as a “payment plan“; or

(C) By other payment arrangement as determined by the court or the court’s designated official;

(b) A court’s designated official shall report to the court on any failure to pay.

(c) As used in this section, “court’s designated official” includes, but is not limited to, a “collections investigator” as defined in section 18-1.3-602 (1).

(2) When the court imposes a sentence that includes payment of any monetary amount, the court shall instruct the defendant as follows:

(b) If the defendant has the ability to pay the monetary amount as directed by the court or the court’s designee but willfully fails to pay, the defendant may be imprisoned for failure to comply with the court’s lawful order to pay pursuant to the terms of this section.

(3) Incarceration for failure to pay is prohibited absent provision of the following procedural protections:

(a) When a defendant is unable to pay a monetary amount due without undue hardship to himself or herself or his or her dependents, the court shall not imprison the defendant for his or her failure to pay;

(b) Except in the case of a corporation, if the defendant failed to pay a monetary amount due, the court, when appropriate, may consider a motion to impose part or all of a suspended sentence, may consider a motion to revoke probation, or may institute proceedings for contempt of court. When instituting contempt of court proceedings, the court, including a municipal court, shall provide all procedural protections mandated in rule 107 of Colorado rules of civil procedure or rule 407 of Colorado rules of county court civil procedure.

(4) If the court finds a defendant in contempt of court for willful failure to pay, the court may direct that the defendant be imprisoned until the monetary payment ordered by the court is made, but the court shall specify a maximum period of imprisonment subject to the following limits:

[HMS – Limitations On The Amount Of Time That Can Be Imposed]

(a) When the monetary amount was imposed for a felony, the period shall not exceed one year;

(b) When the monetary amount was imposed for a misdemeanor, the period shall not exceed one-third of the maximum term of imprisonment authorized for the misdemeanor;

(c) When the monetary amount was imposed for a petty offense, a traffic violation, or a violation of a municipal ordinance, any of which is punishable by a possible jail sentence, the period shall not exceed fifteen days;

(5) This section applies to all courts of record in Colorado, including but not limited to municipal courts.

(6) Nothing in this section prevents the collection of a monetary amount in the same manner as a judgment in a civil action.